I feel kind of bad for never writing anything about Sectionals, but there wasn't really anything that exciting to discuss. Mik and his team did well, but not quite as well as they did at State, and the swimmers overall were stinking FAST. I saved the finals programs so that I can point excitedly to the TV during the 2016 Olympics and say, "I saw him swim a 49.53 in the 100 free when he was TWELVE!!"

My sister and her family are in town, so between the traveling and the festivities, we've been eating less healthfully than usual. M.H. and I are going back on the Whole30 starting Tuesday and eating that way until we leave for Maui. Which is May 27 if you're counting down the days or anything.
Posted by Ironmom (Julie) 1 comment:

Flawed eCard of the Day: I H8 it when they do this 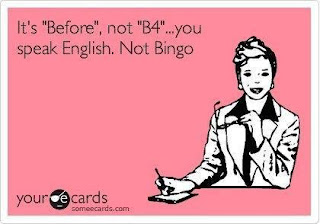 This is going to be a truncated rant, because we just got back from Seattle, and I have a…wait for it…giant pile of crap to get started on.

But I saw this today when I was catching up on my very important Facebook news (immediately preceding the crap-tackling), and I found it particularly aggravating. I have exactly two pet peeves, and this is like sandpaper on both of them:
So this eCard would kind of funny if it were punctuated and capitalized correctly.* But beyond that, who cares if someone types "B4" or "Thx" or "CU later"? Those are just abbreviations. Yeah, they convey a certain extreme informality, but if you're going for that, then you're going for that. As long as it's not in an English paper or a doctoral dissertation, what difference does it make? (Wait. Is it in an English paper or a doctoral dissertation?)

In some ways I don't really mind. I like what I do, my office is a spiffy place, and we could always use the money. But good for me, it is not.

I keep thinking that I'll get my schedule under control JUST as soon as I dig my way out of the current crisis. Ha ha ha ha ha. The current crisis has a deadline of Wednesday, and we have to get in the car and drive to Seattle for Sectionals on Thursday morning. Maybe when we get back Monday night there WON'T be a huge steaming pile of new crisis waiting for me.
Posted by Ironmom (Julie) 4 comments:

Seriously deep revelations on doing vs. being

A while back on my blog I remember declaring that the difference between being Paleo and just eating the healthiest way you know how based on your current understanding of nutrition was that the latter was kind of boring. It's just a more interesting mind-set to tell yourself that you're eating a different way now because you're a different kind of eater.

I might have been on to something there. We've all heard about how we humans have a limited amount of willpower and that each decision we make saps a bit more of it. That's why you can have an insanely productive morning and then spend the last three hours of your day in a trance in front of your computer switching among Facebook, Google Reader, and eBay in between tiny spurts of work. (And when I say "you," I mean "me." And when I say "day," I mean "yesterday.") But you know what? While I may have a Facebook problem—and a blog problem, and a developing online shopping problem—I quit Twitter cold turkey over a year ago, and it doesn't take the slightest bit of willpower to stay away from it. It's not that I didn't enjoy Twitter. I just decided I wasn't the type of person who had time to waste on it.

There's some kind of magic to deciding what kind of person you are, rather than what you're going to do. For example, I'm not the type of person who smokes or gambles or runs up credit card debt, so avoiding those activities costs me absolutely nothing from the willpower bank. This year I decided I'm not the type of person who worries about her weight, so now I don't get on the scale. I didn't have to move it out of the bathroom or put a little sign on it; I just don't think about it. And at some point we decided we're the type of family who cooks and eats dinner together, and not the kind who goes to a restaurant just because we're too tired or too lazy to cook.

As an example from the flip side, I found it ridiculously hard to "suffer for 15 minutes a day" to work on organizational projects. (Remember that?) That's a "doing" resolution, and I might as well declare it dead, since it died the day I got all the file folders off my office floor.

I'm going to think carefully about this, though. It might just be that I am an organized person who takes care of those kinds of tasks without a little rule. I feel a manifesto coming on.
Posted by Ironmom (Julie) 5 comments:

After a couple of months of hunting around for a weight training plan (criteria: It had to be quick, focus on major muscle groups, and spell out exactly what to do) I've finally found one I like. I kind of want to dive right in, but part of the deal is that you're supposed to do those workouts and only those workouts.

Minimalism is great in theory, and I don't want to overdo it, but at the same time, I really don't want to give up my yoga and swimming classes. Plus, I just signed Mik and myself up for the indoor triathlon at my gym, so I want to throw some more running and (gasp) cycling into my regular routine.

I have a secret reason for wanting to step up my training: The way this triathlon is set up, everybody will be ranked based on place in the swim, bike, and run, and all three are equally weighted in the final score. As far as I know, I'm the fastest female swimmer at the gym, and Mik is the fastest male swimmer (at least among the pool regulars). So…we're planning to flat-out win the swim leg, which gives me hope that we could both place overall. There are no age groups, so this 40-something and 10-something will be competing against folks in their physical prime, but I still think we have a shot.

This is new territory for me, because I've never started a triathlon before with any ambition other than to finish and/or survive. Fun, right?
Posted by Ironmom (Julie) 1 comment:

We had decided definitely we weren't going to Sectionals, but the decision was nagging at me. Or more like haunting me. In fact, I had a dream that Mik was standing in his room in utter despair, sobbing. That was the entire extent of the dream.

(Not that Mik was throwing a big fuss over this. He qualified, then qualified two more times for good measure, let us know he wanted to go, asked about it once, and then let it drop. He's awesome like that.)

Yesterday the coach called to see what we were doing, and I found myself starting the decision-making process all over again. I decided to pretend that we had decided to go, and see how that felt for a while. It turned out that that decision—despite all the logistics that needed to be worked out, the days off school (probably three, not two), the lost income, the long drive, the gas, the Seattle traffic, the eating out—was much less stressful for me.

So we talked it over some more and we're going. Maybe we'll go to fewer out-of-town meets in the next year to offset the cost or something. I still don't know if it's the right decision, but I feel pretty serene about that fact that at least it's not the wrong decision. Raise your hand if that last statement made sense.
Posted by Ironmom (Julie) 7 comments:

This weekend was the state swim meet, and it was a big deal for Mik—he swam his little arms off, and his relay team qualified for Age-Group Sectionals in three races. He's been dying to go to Sectionals but is miles away from qualifying in any individual event, so he was really, really thrilled. And he should be; the boys were amazing, and I'm really happy for them.

I'm less happy for myself, though, because now I'm racked with qualms. Am I really going to drive him 1,600 miles, have him miss two more days of school, and pay for four nights in a hotel and four days of restaurants, just so he can swim three relays? There are three other kids who want to do those races, and it would be a great experience for Mik, but is it $1,500+ worth of experience?

Probably not, right? And he's only 12. What would you do?
Posted by Ironmom (Julie) 3 comments: