Kind of (very) swamped with work, but I should be able to spare 10 minutes to blog on a Sunday, for heaven’s sake. So just checking in to talk about how much I loved some of October’s resolutions and hated others.
I have big! plans! for November.
Posted by Ironmom (Julie) No comments:

My absentee ballot came in the mail today, and I filled it out immediately and with glee—glee, I tell you! I usually research every race and end up voting for mostly Democrats and a few Republicans, but this time I just went straight Democrats—I am so mad at the other party for what they’ve inflicted on the world that it might be years before I ever vote for one of them again.

Actually, that’s not quite true. This being Montana, there were a few races that were uncontested, with only a Republican running. In those races, I did do some research. If the candidate had ever said anything positive about Donald Trump, or indicated that he might be in that camp, then I wrote in his primary opponent rather than vote for him. Just out of principle. But I did end up voting for one lovely-sounding Republican who was running uncontested.

I have railed against third-party and write-in voting recently, so before anyone calls me a hypocrite: I have nothing against protest votes generally; I just think it’s incredibly stupid and damaging to use one in the presidential contest this year.
Posted by Ironmom (Julie) No comments:

The Month of Blissful Ignorance: Day 13

It’s been a tough couple of weeks around here, but the funeral is over, and I am starting to feel some energy coming back. I basically just chucked all my resolutions for the month—I’m still staying away from Facebook and Twitter, but other than that…oh, well. (I think don’t-do resolutions must be easier to keep than the do-do resolutions when you’re already busy, drained, and exhausted.)

I am noticing the positive effects of staying off of social media, though: The “twitch” to check it every time I get the slightest bit bored/sad/challenged is going away. And, while I’m still aware of certain political idiocies, I’m not particularly riled up about them. All of that is really good, because I’m entering a busy period of work and can’t afford to waste massive amounts of time worrying about things I can’t control.

On the other hand, I’ve definitely decided that I don’t want to give up Facebook and Twitter forever. I miss knowing what my friends are up to. And sometimes you need to veg out a bit, and I could argue that Twitter is actually a better use of my time than a couple of the other choices I have been making lately (*cough*“Steampunk’d”). So I need to think of a good way to corral my social media checking and keep it away from my workplace. Am thinking of making it an only-after-dinner thing…
Posted by Ironmom (Julie) No comments:

This true and beautiful thing.

I come down on the side of generally against abortion, by which I mean I am horrified by it and can see some good arguments for it being made illegal in many cases. But I also see a huge swath of gray area—and I’ve come to believe that people who see NO gray area, whichever side they are on, are not really thinking about abortion very clearly.

But we should all be able to agree that it would be great to reduce the demand for abortion, and the fact that so many Christians are actively working against that—whether they realize it or not—is infuriating. (I also know some Christians working actively for that with a program that gives supplies and advice to young parents—those folks are bearing fruit, and they rock.)

But if the main reason you are voting for Trump is because you want Roe v. Wade overturned, please read the link and give it some thought.
Posted by Ironmom (Julie) No comments:

The ignorance I’m experiencing from not being on social media is kind of blissful—I don’t think I’m unaware of anything I really need to know about, but it’s kind of nice to not be caught up in whatever new thing everyone is enraged over toady. I miss not reading about that stuff about as much as I expected: It was good entertainment, but it wasn’t vital to my life.

What I do miss more than I expected is having an easy way to express myself and talk about things. For example, The Atlantic had this glorious endorsement of Hillary Clinton, and all I wanted to do was share, share, share. “[T]he most ostentatiously unqualified major-party candidate in the 227-year history of the American presidency”? C’mon. I need that on my Facebook page! Who wants to discuss?

The other thing I’ve noticed is that Facebook in particular is absolutely dastardly in its efforts to win you back once it realizes you’ve left. A few days ago, I got an email informing me about some random thing some friend had posted, which I don’t remember ever happening before. There was an Unsubscribe button, so I clicked it, and it brought me to…Facebook. So I was able to unsubscribe, but not before they had made darn sure I was aware that I had 14 unread notifications! Plus, maybe it’s my imagination, but the number of alerts I’m getting on both my phone and desktop seems to have increased. I don’t want to bother turning them off, because I’ll just turn them on again in November. But Facebook clearly misses my business.
Posted by Ironmom (Julie) No comments:

It seems stupid to talk about something as frivolous as my social media challenge in light of my grandmother’s recent death, but it raises some interesting questions for me.

By deliberately not telling my social network about her passing, are there people who would genuinely like to know who will not find out at all, or not for a while? Would I get some comfort from posting about it on Facebook and receiving a flood of sympathetic comments? Is this an occasion where it makes more sense to break my resolution long enough to let my friends know? The answers are I don’t know, I don’t know, and I don’t know.

I seem to remember that when my grandfather died in 2009, I didn’t do anything more than post the obituary I had written as a note on my Facebook page. (Oh, and since he was also my Scrabble buddy, I challenged all my friends to tribute games of Facebook Scrabble.) I can’t remember whether either of those things helped.

A final thought: I’ve noticed before that I automatically twitch to Facebook or Twitter whenever I encounter something hard, something boring, something frustrating, something annoying. I can now add “something sad” to that list—there are other (healthy and unhealthy) ways to numb pain, of course, but it’s shocking to think how much I would be using social media for that if it were an option.
Posted by Ironmom (Julie) 4 comments:

To mark a passing 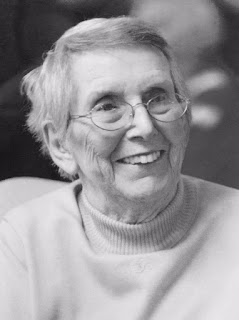 Joan Mae Haiston O’Brien, 92, died in her sleep Sunday, October 2, 2016. Joan was an original member of the Billings Symphony Orchestra, for which she played the harp for 50 years before retiring in 2001. As one of the few harpists in Billings, she continued to teach private lessons well into her 80s. She loved the sound of the instrument and was often told, “You’ll play first chair when you get to heaven.” Joan had lived in Westpark Village retirement community since 2010 and was a longtime member of First United Methodist Church.

Joan was born December 27, 1923, in Omaha, Nebraska, to Frank Edward Haiston and Lula Donnie Vieth. Joan’s father died when she was 2, and her family moved in with Joan’s maternal grandparents in Oakland, Iowa. Joan’s beloved grandmother died when she was 8 years old, and she often missed her mother, who taught school in a town six miles away—which was such a long trip on dirt roads that Lula was able to come home only on the weekends.

Joan graduated from high school at age 15. She received an associate’s degree from Christian College of Columbia, Missouri, in 1942, and a bachelor’s degree from the University of Iowa in Iowa City in 1943. She met James Richmond O’Brien on a blind date while both were attending the university. They were married in 1944 and, after World War II, settled in Billings, where Jim worked as a civil engineer. Jim preceded her in death in 2009, just a few weeks short of their 65th wedding anniversary.

When the oldest of her four children started college, Joan also went back to school to get certified to teach in Montana. She started teaching English and basic math in Worden in 1967 and then taught speech, English, and drama at Lincoln Junior High School in Billings from 1968 to 1985. She was an avid golfer and a member of the Yellowstone Country Club. She also led Girl Scouts and was active in the Billings chapter of Alpha Chi Omega. In her free time, she enjoyed crossword puzzles, bridge, pinochle, baking, needlepoint, knitting, and correcting the grammar of her children and grandchildren.

Joan is survived by her children, Teresa McCombs and her husband, William, of Wichita, Kansas; John O’Brien and his wife, Peggy, of Billings; Barbara King and her husband, Corey, of Snohomish, Washington; and Kathleen Joan O’Brien of Portland, Oregon. She is also survived by nine grandchildren, Carolyn Hill, Janet McCombs, Julie Van Keuren, Jennifer Jasper, Christine Brittle, Renee King, Christopher King, Hilary Contolini, and Jack Wittrock; and 10 great-grandchildren. She was preceded in death by her older sister, Doris Hoffman, in 2007.

The Month of Blissful Ignorance: Day One

A few weeks ago, I tweeted “Just a friendly reminder that Hillary Clinton is the only person who can save us from a Trump presidency and that if you don’t vote for her you’re dead to me!” I thought it was funny, and I sincerely believe the first half of it—plus it got a handful of retweets and likes, which for me signifies a killer tweet. I pinned it to the top of my timeline and planned to leave it there for the month of October.

Then, on Day One of my no-social-media resolution, I got on Twitter for 15 seconds and—squinting so I wouldn’t see anything else—deleted it. It had taken all of four hours away from social media to realize that it was so mean that I couldn’t stand to have it sitting there. Holy detox.

Summary of Day One activities: