The freaking out before the storm

You know that advice to cook a bunch of meals and freeze them before you have a baby so that later you won’t have to cook so much? That was what I did today, only instead of a bunch of meals I made two casseroles, instead of freezing them I put them in the fridge, and instead of having a baby I’m preparing for a book deadline.

See, Happy is making me a bit frantic because there’s a giant, ominous deadline looming, and instead of sending me book chapters, he’s off frolicking somewhere. As soon as he does resume sending me things to work on, it’s going to be crunch time in a big way.

Now I’m off to think of more things it would be useful to have done before I get perma-chained to my desk…
Posted by Ironmom (Julie) No comments:

Toward a more functional kitchen

The big task of the month was to Kon-Mari the kitchen, which—spoiler alert—was a ton of work.

Step one is to take everything out and put it in a big, ugly pile: 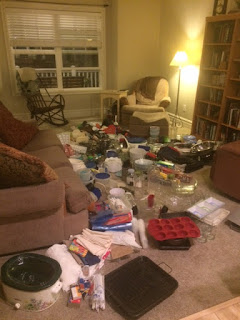 In case you are considering trying this, step one is very important. It’s the step that makes you go, “What was I thinking? What is all this crap? This is insane,” which is exactly the mindset you’re going to need for the labor ahead. Trust me.

The “official” next step is to start touching every object to separate out the things that bring you joy, but since we’re talking about the kitchen, for crying out loud, we did it a bit differently.

Actual step two was to clean all the crumbs from the empty cabinets and drawers. Steps three and four were to put all the super-obvious throwaway/giveaway stuff in their own piles. Step five was piling up things that we do use, but only once or twice a year, like cake pans (which ended up going in that inconvenient cabinet above the fridge).

Then the real work started. We tried to think through how and where we used everything, which systems were already working pretty well, and what needed to be moved to easier-to-access locations. One of my main goals was to not rely too much on stacking things up—I wanted everything to be easy to get out and easy to put away, and not, say, in a teetering pile of mismatched bowls.

We put back all the easiest, most-used things first, of course. After that, everything easy to categorize (the obviously junk and obviously needed) had been dealt with, and it was time to go through the mushy middle, where the decision-making starts to break your brain. In the end, we solved the problem by putting some stuff in a storage box and taking it to the basement—where I’m sure it will sit untouched until we move and then get donated—but at any rate it’s out of the kitchen now, so I’m content.

End result: The kitchen looks exactly the same as it did before, but it’s a lot more fun to open cabinets.
Posted by Ironmom (Julie) No comments:

I’m trying hard to stick to my shoulder-healing plan—which is simply rest, stretching, and ibuprofin—but it’s so hard for me to remember to take pills four times a day. Even setting an alarm doesn’t always help; I have, a couple of times, heard the alarm, silenced the alarm, gone downstairs in the direction of the pills, and still forgotten to take them. So I got a second bottle of ibuprofin and brought it upstairs, which helps. But of course I still have to remember to set the alarms.

The point is, being unable to remember to take ibuprofin is a real obstacle to my goals, and I realized that, now that I’ve identified it as an obstacle, it’s something I can take steps toward improving. So I decided to figure out some of my other life obstacles for future tackling:

I’m sure there are more, but that should give me plenty to work with for now.
Posted by Ironmom (Julie) No comments:

A low-carb zucchini “recipe” I made up

I decided to go full-on radical health nut and start buying eggs from a local farmer. Or maybe “farmer” is too strong a word. Anyway, she has lots of chickens (which she referred to as her “girls”) and she sold me 36 eggs and the biggest zucchini I have ever seen in my life for $7. Today M.H. and I Alt-Shifted back to low-carb eating, so I decided to make something appropriate from my farm bounty.

Half an enormous zucchini, grated, salted, sweated, and drained
Six or seven eggs, some of them adorably tiny
A heaping tablespoon or so of minced garlic
A bunch of shakes of Parmesan cheese
A teaspoon of coconut flour
Several shakes of chives
Salt and pepper

I mixed all of the above in a big bowl, cooked four pieces of bacon in two frying pans, removed the bacon, and then cooked half the egg mixture in each pan of bacon grease. I was kind of expecting something like scrambled eggs, but they turned into the most beautiful, golden, delicious patties.

I ate mine with sour cream and the bacon, and next time I might add salsa and/or scallions. They were really good!

So far I’ve tried three recipe candidates for a new meal to add to our rotation (which is my goal for October). The first two were pretty good, but they seemed like too much work to end up as regulars. This one was pretty easy and I loved it and want to keep it forever.
Posted by Ironmom (Julie) No comments:

Fixing my other shoulder

I was trying to remember just how it happened that one of my shoulders got completely healed, so I checked my blog archives. Turns out it was the shoulder-healing protocol I put myself on back in May, which I had basically forgotten about.

I am torn, because I just got to the point where I can kind of do yoga again, but I think it might be time to do another eight weeks of total rest and Advil. I am so sick of this shoulder bothering me, and it’s almost worse to have one that works properly because it’s a constant reminder of what shoulders are supposed to do.

It might be disastrous to stop yoga again for eight whole weeks, but I think I am mentally strong enough to go to my favorite classes but modify everything so I don’t lift or put weight on that shoulder at all. I also still have the no-shoulders yoga practice my teacher friend wrote for me…
Posted by Ironmom (Julie) No comments:

I had a lot of ambitious ideas for the month of October, but when I stopped to think how busy I’m going to be, I decided not to get too crazy. The only major task on the list is to Kon-Mari the kitchen (actually, it turns out the Internet-approved verb is “to Kondo”), which is probably something that was going to happen anyway.

But here’s the October list:
I like how the theme of coziness ties everything together in a little bundle of fall-embracing domestic wonder, but I’m especially excited about the rule I came up with. For a while I’ve been bemoaning the fact that, even though I really thrive when I have some sort of regular routine, my erratic job prevents me from ever keeping to a schedule. So, for example, because I can’t commit to getting to the gym every morning at 8, I almost never go.

What I can do, though, is commit to five minutes a day to figure out what kind of exercise I want to do that day—and how to make it work with everything else I need to do. I guess when you can’t have a schedule, the next best thing is a list? 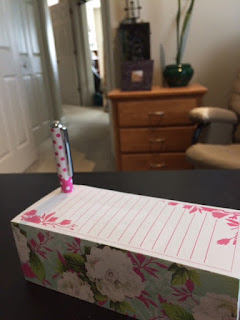 Plus, what a great way to use this notepad I found while cleaning my office last month!
Posted by Ironmom (Julie) No comments: