Updates on life and lemint

I think I maligned the lemon-and-mint-infused water before. It’s really refreshing, I’m starting to “get” the flavor, and I keep making more and more of it. Revised rating: 8/10

I also tried a couple of concoctions with orange slices, but I didn’t think they were good at all:
When I’m not infusing water—oh, who am I kidding. I’m perpetually infusing water now.

Along with all this water infusing, I have been crazy-busy all June with work and travel and major life events, starting with my eldest graduating from high school. (Say what??)

On Thursday he heads off on a road trip with some friends, and the next thing we know he’ll be off at college. He won’t be that far away, and I know he’s going to love it, so we’re probably as emotionally prepared as we can be. I think my job right now is to not interfere too much as he has these last-splash events with his high school friends and deals with all the leaving-the-nest tasks.

After graduation, we attended a three-day college orientation with separate programs for the parents and students. It was pretty fun, but I’m not sure it was strictly necessary for the parents. Probably just the university’s sneaky way of forcing us to practice the big drop-off ahead of time.

After that we did two weekends in a row of swim meets, with me working frantically in the days in between to meet some deadlines.

Now I’m realizing that there’s one month of summer gone already, and if I want to make the most of what’s left, I’m going to need to do some serious fun-planning for July and August. Fun is GOING ON THE CALENDAR.
Posted by Ironmom (Julie) 2 comments:

I don’t know why this might be, with everything going on in the world and in my life, but today I’ve decided to drop in on the blog to talk about… 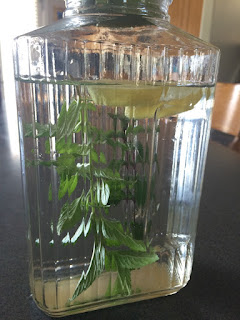 This is a sprig of spearmint, a sprig of peppermint, and two lemon slices. In water. It is so dang pretty and refreshing and basically solves all of my problems. Or, to be more precise, my two small problems of 1) having too much mint in my yard and 2) drinking too much tea and not enough water.

(Honestly, it doesn’t actually solve Problem #1 because, who am I kidding, that’s about one-millionth of my mint. And I don’t know if Problem #2 is a real problem, but if you knew how much tea I drink, you would probably advise me that it couldn’t hurt to cut back.)

Review: As much as the world keeps insisting that lemon and mint go together, I still don’t buy it. You taste the lemon and mint separately, not as some cohesive blend, which is too bad, because we could have called it “lemint.” Still, ridiculously cooling and refreshing. 6/10
Posted by Ironmom (Julie) 1 comment:

If I’ve learned anything about making resolutions, it’s that they work out better when I put a lot of thought and care into them. Otherwise I’ll change my mind or lose interest before the month is over. Just a fact.

So today is June 1, my May resolutions were only sort of halfway kept, I’m swamped with work, and I’ve given zero thought to what I want to do next. I was going to think some up June resolutions anyway, but I could tell that it was going to be pointless. Then I decided I should just reprise my favorite ones from the previous 18 months, but that was no fun and also pointless (since the best of those habits are still going strong anyway).

Plus, looking at the calendar for June, we have house guests, a big graduation party, Dex’s college orientation, an out-of-town swim meet, an out-of-state swim meet, and the usual infiniwork. July is almost as busy, and August’s planned activities include driving from Montana to California and back and taking our firstborn to college.

So new plan for the summer: Take a break from resolutions! Time to think (and blog) about other stuff. I think it’s the right decision, because it sounds really fun. :)

GREAT report card for May

Can NOT believe it’s June today. This nonsense is all a day late, but May overall was nuts, and I had real-life things to attend to, like successfully meeting a book deadline (woo-hoo!). And this: 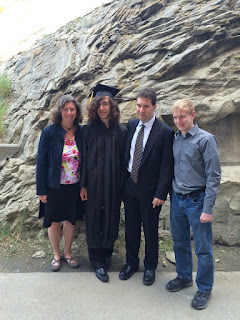 (Don’t you hate it when multiple people are taking pictures and in every photo everyone is looking at a different stupid camera? Scourge of modern society.)