I've been pretty good about sticking to a Paleo diet lately, and decent about getting to the gym, but I'm starting to get frustrated. I've been feeling a bit stiff and sore, I pulled a muscle a few weeks ago playing softball—which has never happened—and it seems to me that I just might be gaining some weight.

(I didn't weigh myself to find out, since I've evolved beyond the need for scales, but this might be the type of case where it would be helpful to have that information. Not in an obsessed-with-the-meaningless-number kind of way, just in a clinical, detached, is-there-a-problem-here-and-what-can-I-do-about-it kind of way. You know.)

Anyway, I'd been thinking it might be time to experiment some more to see if what I'm eating really is the optimal diet for me, and just now I ran across this article: "Are Happy Gut Bacteria Key to Weight Loss?" Well, you know how question headlines work as well as I do. The answer is always, "Yep. Looks like."

A gross oversimplification of what I just read would be that the real culprit behind everything bad (including the bad things that are happening to me) is inflammation, and since your body is 90% bacteria, you would be wise to keep them not inflamed.

And so a gross oversimplification of my New Life Plan would be that I'm going to keep researching things that cause inflammation, and things that decrease it, and act appropriately. The first step is going to be to give the ax to dairy again. I'd convinced myself that it had no effect on me, but I think maybe that was just the cheese talking.
Posted by Ironmom (Julie) 1 comment:

Ever feel like the universe is conspiring against you? Well, me neither, except perhaps in the isolated case of trying to perfect my Paleo fudgesicle recipe. First, the grocery store ran out of coconut milk, then everyone hated the idea of adding avocado to them, then everyone hated my second and third tries, then I had to stop eating so many fudgesicles because they were making me a bit loopy.

Therefore, I'd like to present a list of the ingredients I originally threw together, which do make a darn good fudgesicle. One of my guinea pigs was a teenage friend of Dex's, who took one bite and exclaimed, "Oh my gosh! These are amazing!" Of course, this is a kid who in the past year has said much the same thing about my Paleo cookies, homemade salad dressing, hash browns, chili, and Brussels sprouts, so clearly he is of especially discerning taste and we just might need to adopt him.

Put in a large Pyrex measuring cup:
1 can coconut milk
1 oz. square of unsweetened chocolate
Microwave at low power for about two minutes, and then stir until the chocolate is melted.

Mix well and pour into popsicle molds. This makes five fudgesicles in ours. For a family of four. Oh, dear…

Notes: You could of course do this on the stovetop, but the pourable measuring cup makes everything easier. I tried adding a quarter-cup of almond butter to this recipe, and I thought it tasted like peanut butter ice cream, but no one else here really likes peanut butter ice cream. I also think that if you really like your chocolate really dark, you should try adding several teaspoons of cocoa powder. Finally, I would have liked to experiment with using pulverized blueberries or dates or bananas (plus a blender) instead of maple syrup, but the universe didn't want me to (see above).
Posted by Ironmom (Julie) No comments:

Fudgesicles and other fun stuff

Some exciting news:
* Zubotix.com and Aronwatch.com, in case you were wondering
Posted by Ironmom (Julie) 2 comments:

Hey, look! I made good on my vow to get to the mountains more often this summer! (Actually, what I said was "every other week or so," so maybe I have not made good yet, but it's a start.) Mik is not a big fan of hiking, but he's off at swim camp this week, so M.H., Dex, and I set off yesterday up the Basin Lakes Trail west of Red Lodge. There was some fire damage from a few years ago, but it was still kind of pretty: 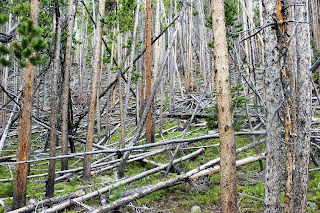 As we were going along, we passed some people who said they had seen a moose and her calf "around the next bend." Dex and I got excited, because we have never seen a moose in the wild and had been actively looking for one for years. "Around the next bend" did look rather moose-friendly, but we were disappointed not to find anything: 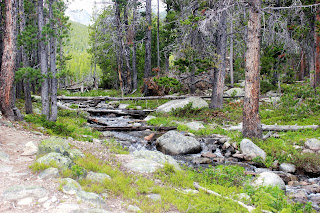 After that we had a bit of a dilemma, because we wanted to be quiet so we didn't scare off any moose, yet loud so we would scare off any bears. (Dex said, "Think of it this way: Would it be worse to not see a moose or to get mauled by a bear?" Good point.) Anyway, the trail was super steep, but we eventually arrived at our first destination lake: 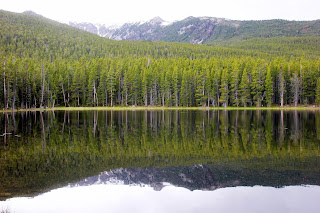 We'd been told it was a "frog pond" compared with the upper lake, so we were looking forward to getting up there, but I was starting to drag. Perhaps there was a day when I would have laughed off a four-mile hike straight up a mountain, but this was not that day. By the time we made it, even Dex felt like collapsing: 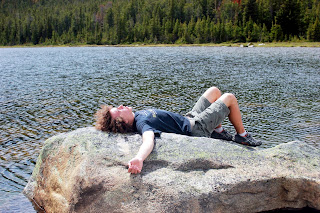 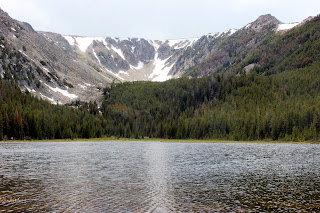 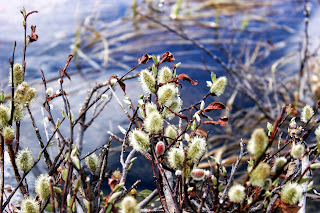 It was also our 20th wedding anniversary, so we had Dex take our picture: 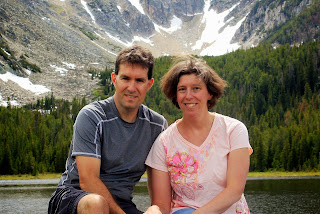 I was worried about my hair being in my face, so he took another one. After 20 years of marriage, I guess we even blink in sync: 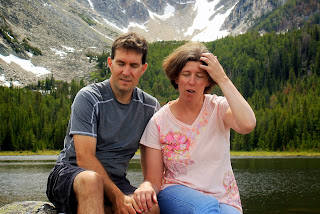 Then Dex was messing around with the binoculars, and will you look at what he spotted across the lake? 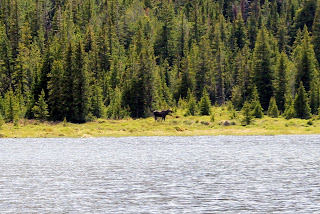 Moose speck sighting! And, just like that, the first hiking trip of the summer became an unqualified success. We trotted the four miles back down the mountain, ate a huge pile of calzones in Red Lodge, drove home, and fell instantly asleep. The end.
Posted by Ironmom (Julie) 1 comment:

A visit from the Obvious Solution Fairy

I complain every summer about the stupid (%*@%!) birds waking me up at 4 a.m., but the other day I thought of something I could actually do about it: earplugs. Duh. I have some soft, cheap, disposable ones that I wore to a Weird Al concert last year,* and they have changed my life in the space of a week.

We get like 27 hours of sunlight a day this time of year, and I remember writing once that the mornings and evenings are both so wonderful that it's hard to get any sleep because you don't want to miss either of them. Turns out, the mornings? Completely missable. I'll take nine hours of chirpless bliss instead.

* Earplugs totally ruined that concert for me, by the way. I could hear the music okay, but not the crowd, and I couldn't ever shake the impression that everyone else was just sitting there quietly with their hands folded in their laps.
Posted by Ironmom (Julie) No comments:

Glad to have my brain back

M.H.'s new book, Legitimacy, has been a bajillion or so years in the making, but before we left for Maui, we finished the final edits on it. A big but qualified hooray! We had one more thing to tackle when we got back: the dreaded summary blurb for the back of the book and the Amazon description.

Have you ever tried to write something like that? It is so hard to take all those complex concepts and boil them down to 200 words that are accurate but still sound good and don't give too much away and make people want to buy the thing.

I feel like I should theoretically be pretty good at it, having spent lots of years writing headlines and blurbs and snappy ledes for newspapers. It turns out I am not good at it at all, and it's not M.H.'s kind of writing, either. When we work together, we can eventually make it happen, but it's a slow, frustrating, marriage-denting process that makes us alternately miserable and angry. Why can't we write a single thing that sounds interesting? This is a bunch of decent sentences that have nothing to do with one another. We can't say "solar system" three times in the same paragraph. You read the novel six times—you don't know what it's about? I have so much other work to do besides just this! No, YOU should go make dinner. That's where we've been for a week now.

Anyway, I am pleased to announce that M.H. had a brainstorm yesterday and managed to weave all the concepts and phrases we had been playing around with into a book description that actually works. Oh, the sweet freedom of not having to stare at the file called BLURHB every day!
Posted by Ironmom (Julie) 2 comments:

Sorry for this nonsense

…I haven't for weeks now, and I hate "sorry I've been gone" posts.

…I've just gotten back from a vacation, and I hate "here are some photos of my boring (to you) vacation" posts.

…I have a million things to catch you up on, and I hate "catching up" posts.

…All my creative energy is going toward working and helping M.H. get his new book out, and I hate just posting whatever nonsense may be left over in my brain (oops).

I'll get back to you sometime.
Posted by Ironmom (Julie) 2 comments: