I reread Eat, Pray, Love, but it didn’t have the stuff I thought I remembered about trying to find a happy medium of jaw tension or whatever. (Must have been some other memoir involving meditation; those are pretty much my jam, and I know I’ve read a few.) EPL is a really good book, though, and this time I identified a lot more with the Pray section that’s focused on meditation. (Last time I remember liking the Eat section best; my guess is that the Love chapters will never not be at least a tiny bit annoying for various reasons.)

Rereading a book I know I like was so nice that I then reread Eleanor & Park and have started into A Handmaid’s Tale. All part of the “Go easy on my tired brain” master plan.

I’ve also decided to slow my roll with meditating; rather than jumping back to 45 minutes now that my big project is done, I want to sit just as long as I can without having to change positions at least once. It’s so much more pleasant. My legs have still been falling asleep, but not in a way that bothers or distracts me. I’ll try to ease back to longer sessions as my body allows it.
Posted by Ironmom (Julie) No comments:

Mik is notoriously not much of a communicator, so as his loving mother I’ve been living on crumbs of information since he left for college in August. It’s hard work to piece together a coherent narrative about someone’s life from (a) texts saying “OK,” (b) phone calls saying “Good,” (c) the occasional social media image of the back of his head, and (d) an app that spits out swimming results (which don’t lie but are nonetheless tricky to extrapolate into well-being).

But last week I got a big, meaty chunk of data.

Whoever is in charge of the Kenyon swimming Instagram put up a whole post just about Mik after he tied for 32nd in one of his races and had to do a swim-off for the last available slot in finals. They said he had grit! They said he made them proud! They used his preferred nickname (which is not “Mik,” lol)! They called him the “MVP”! They posted a video showing him absolutely destroying the competition with a bunch of kids yelling in support!

I’m thinking you simply don’t post glowing praise about the kid who gets 32nd place unless you’ve noticed that he’s a hard worker and a good person. And he clearly wouldn’t have a charming nickname unless he was fitting in well with the team. So I think he must be…actually good.

If both my children are now nice and happy adults, I believe that means I’ve officially graduated from parenting with honors, correct?
Posted by Ironmom (Julie) No comments:

I feel dumb for having a goose egg on my list up there. There’s no good reason; I almost think the meditation-in-the-face-of-overwork plan was going too well and I was cheerfully doing all things in moderation and living my best life off Twitter and randomly decided it didn’t matter and told myself that as long as I was getting my other priorities achieved I could surely go easy on myself in whatever other ways I wanted. Or something.

What would really be dumb is to dwell on it or let it derail me, so enough said about that. The important thing is that so far everyone in this house is surviving November. (Frankly, we are DOMINATING November, and you should be proud of us.)
Posted by Ironmom (Julie) No comments:

Thinking about my face

I’m feeling much less stressed, but that’s probably 75 percent giving up Twitter, 20 percent nice enough weather to take walks, and only 5 percent tweaks to meditation routine. But that stuff helped, too. My little kickboard/pillow/zafu setup is extremely comfortable, 30 minutes is a really nice amount of time, and I’m starting to feel more settled as a whole.

A weird problem that has cropped up is that I’m struggling to find a happy medium between clenched jaw and loose-and-drooling jaw. As a result, I can’t stop thinking about my face. I’m sure this new nonsense will work itself out, but in the meantime I remember Eat, Pray, Love talks about something like this, so I think I’ll reread that just for solidarity.
Posted by Ironmom (Julie) No comments:

I remembered that I am my own coach, and here are my own coach’s answers to some of the questions that have been troubling me.

Q: How can I avoid feeling tortured while meditating during times of stress?
A: Plan for two 30-minute sessions. And set your meditation timer to also give a little clunk at 25 minutes so you can bail out early if you really feel like it.

Q: How can I make more time to work and still keep up my practice?
A: You are only human, and if you have to do only one session a day, that’s OK for now. Think big-picture. But definitely give up Twitter at the same time.

Q: How can I get more comfortable and stop my legs from falling asleep?
A: Shorter sessions, plus a complex piece of engineering involving a large cushion, a zafu, and a kickboard.

Q: Is meditation a break for my brain or a bunch of extra work for my brain?
A: Just chill a bit and behave as if it’s a break.


Posted by Ironmom (Julie) No comments:

My zafu came in the mail (YAY), so I jumped back to 45-minute meditation sessions, but I am still having a hard time. This morning’s session felt like torture, to be blunt, and I don’t want to start associating my meditation time with negative emotions, let alone torture.

I really think it’s because I’m working so much. Is working myself into the ground just incompatible with a meditation practice? Because I need to work myself into the ground right now—it’s kind of what I signed up for, career-wise, and it’s only for another week and a half. So my question is this: Is meditation actually a rest for my brain, and therefore helping, or is it just adding to the workload already going on up there, and therefore hastening my spiral into insanity?

I gave some serious thought to cutting WAY back on meditation time until after my deadline, just to have an extra half-hour a day to work. But then I realized I hadn’t considered the option of giving up Twitter instead, which is probably also a half-hour of my day, and which also leaves me extremely agitated. So I guess I’ll do that first.
Posted by Ironmom (Julie) No comments:

Gave it my best shot 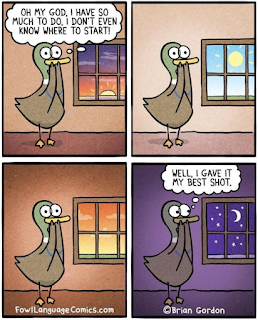 A Facebook friend posted this today—I had seen it before, and you probably have, too, but it really struck a nerve. An absolute dump truck of work landed on me yesterday, along with a nasty complication caused by a software update, and I had barely scratched the surface of it before I melted down into whiny, tired, paralyzed, not-even-doing-her-second-meditation Julie and gave up.

(I should maybe add that even whiny, giving-up Julie was still fairly productive, because I ended up cooking a week’s worth of breakfast casserole and a pan of roasted carrots while I was having my mental meltdown. M.H. is at least as busy as I am, and I am trying to keep us both alive.)

Anyway, I’m going to throw a dart, start on whatever it hits, and get back to work.
Posted by Ironmom (Julie) No comments:

I might be taking a tiny step backward here, but so far I absolutely love breaking up my meditation into 30-minute chunks. I end up with more total minutes per day, but it seems so much more manageable. The key reason is that my legs tend to fall asleep around the 25-minute mark right now, and that’s not nearly as distracting when I know I have just a few minutes left anyway.

At some point I need to go back to 45-minute sessions (the length suggested as a minimum in The Mind Illuminated), but I think I’ll at least wait until my meditation cushion is delivered.
Posted by Ironmom (Julie) No comments:

I’m sure I’ve said this before, but I need a sign for my office that says: “Everything remains stupid; do not visit Twitter to verify.” And underneath in smaller letters: “If Trump dies, you will hear about it some other way.”

And what about Facebook? If ever that nonsense needed to be boycotted, it’s now. It’s such a shame, though, because even more than this blog it’s an online diary for me, going back 12 years to when my children were actually smallish. It has friends I don’t have any other contact with. And now it also contains occasional glimpses of my little college swimmer Mik, via videos posted by his team.

I did delete the Facebook app from my phone, but that was mostly because the settings kept reverting to turn on “in-app sounds,” no matter how many times I turned them off (three).

Again, I don’t want to go crazy imposing rules on myself, because I want to focus on meditation and actually follow through with it. (For how long? The book says I should be able to achieve enlightenment within seven years, so I’ll let you know in 2026.)

I might have to control my social media habits using mindfulness and (ugh) moderation.
Posted by Ironmom (Julie) No comments:

I am trying to be conscious about not starting five New Life Plans at once any more, in favor of doing just one thing and then actually doing it. (Here comes the but…)

But I figured out a while ago that one of the secrets of enjoying each season more is to change your habits to reflect what’s happening outdoors. I would actually like to do a lot more of this, but so far I have: In the summer I bask in the sun and don’t watch television and eat carbs/fruit. In the winter, I bask in the bathtub and watch TV and go keto.

I know there are two other seasons, but in Montana they’re not anything you can really plan your life around.

And since it’s November 1 and it was below zero this week and there’s snow on the ground, I think we’ve officially come to winter. I can’t watch TV until my big book project is done—and M.H. is going to want to wait until after NaNoWriMo—but I’m already in the process of changing up my diet. I’m probably going to have to start reading keto blogs again to help me remember what to eat.
Posted by Ironmom (Julie) No comments: