School starts tomorrow for Mik tomorrow and on Thursday for Dex, although—get ready to spit out your beverage—Dex has been attending class at the local college all week for his computer programming class. He gets credit and had to buy a $120 textbook and everything. When he headed out the door to Go To College on Monday, it felt so momentous that we all came out to see him off; Mik ran at him like he was thinking about giving him a hug or shaking his hand or something. I guess I’m not the only one acutely aware that we have only two more years before he goes away for real.

I can’t believe how little “summer fun” I managed this year. I’m going to be kicking myself when it’s 10 degrees and snowing, in about two weeks.
Posted by Ironmom (Julie) No comments:

I had a feeling I wouldn’t be able to leave well enough alone where my hair was concerned, and sure enough, I cut it one more time last week. Everything is fine, but if you ever decide to try this, heed my cautionary tale…

So I was happy with the cut in general, but I wanted to take some of the overall length off. That’s a bit harder to do yourself than layers, so I studied up as much as I could (this was the most helpful tutorial) and decided I would start with a tiny bit and, if all went well, gradually cut it to chin length.

The scary part—the part to heed, so to speak—was that I ended up cutting it chin length on the first attempt without even remotely meaning to. Fortunately, everything looks even, so I didn’t have to take off more length to straighten it out. Thank goodness I was at least trying to start small.

I guess I’ve got to show you the evidence now, so here it is, with the disclaimer that it air-dried this way and I didn’t even get up from my chair to brush it first: 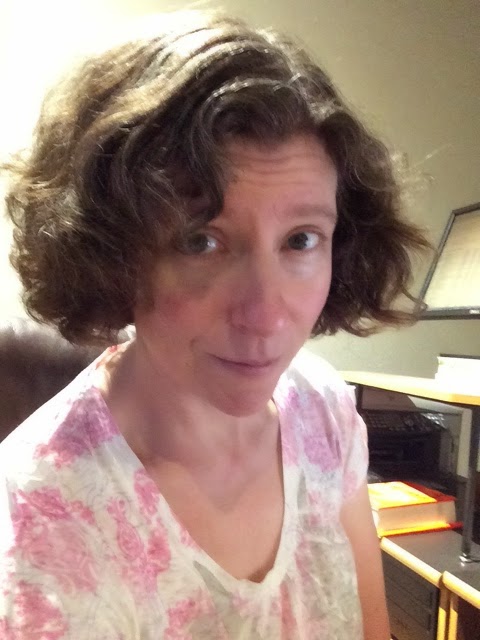 An update for the sake of an update

I think I’m seeing some work light at the end of the work tunnel, but even so it’s still been really challenging for me to blog lately because most of my waking thoughts are consumed with an experiment I’m not ready to tell you about. Sorry to be so mysterious, but it’s the truth.

(Now I’m wondering if my sleeping thoughts are consumed with The Mystery Topic as well, but actually the last dream I remember having was some sort of play that was being narrated by the robotic voice of the text-reading program that I’ve been using to help me copy edit for up to 14 hours a day. I don’t need that one analyzed; clearly I’ve been working too hard.)

Hmm, what else? I’ve been running pretty frequently, but only for very short distances and only (after warming up) very fast. In fact, I’ve been trying Tabata-style intervals of 20 seconds all out and 10 seconds rest, repeated eight times. That’s four minutes of hell, in case you’ve never tried it, and I’m still working up to eight whole intervals for 20 whole seconds with that little rest. But it’s a quick workout and supposed to be very effective, even if it does attract some strange looks and funny comments on the bike trail. (Yesterday, an elderly man said, “Well, look at you go!” as I pounded by.)
Posted by Ironmom (Julie) 1 comment:

A most excellent break

This long blog silence has been brought to you by Dopey, Grumpy, Sneezy, and Bashful. I don’t know if I need to translate that sentence, but in case you didn’t know, it’s my special code for A WHOLE LOT OF WORK.

In the middle of all that work, though, my sister invited Mik and me (Dex had to work and M.H. doesn’t do boats) to go boating with with them at Yellowtail Reservoir. I should have said no and read 150 pages of Dopey’s new book, which I am desperately behind on, but instead I said yes and it was exactly what my life needed.

The best part was that while we were hanging out swimming in this little cove, a young bear wandered down the canyon. I slipped into the water to swim over for a closer look, and then the bear jumped into the water and started swimming, too! I stayed well away—although even with a semi-bum shoulder I think I could have outswum its little bear-paddling self pretty easily—but got to watch it swim and wander around for quite a while at fairly close range.

Speaking of swimming and bum shoulders, I had not been in the water for many weeks, but I found that I can now do freestyle and breaststroke without pain, which is a big improvement. (Backstroke still hurts a little, and butterfly hurts a lot.) But mostly it was just glorious to be swimming around in a lake for fun rather than being slowly poisoned by pool chemicals and the drudgery of “laps.”
Posted by Ironmom (Julie) 2 comments: