Our family has been going through a big adjustment because Mik has started swimming at 5 or 5:30 in the morning four days a week. M.H. gets up to drive him, and I have been trying to get up, either to go to three-hours-before-sunrise yoga or to start work. I’m pretty much a big baby about early mornings, but there’s really no getting around this schedule change, and I think the presence of a great yoga class at 5:15 a.m. a couple of days a week can turn it into somewhat of a bright side.

Plus the early-to-bed-etc. thing is helping me feel virtuous/healthy, which I had been craving after overdoing Carb Nite last week. I don’t know that there was anything wrong with that, per se, since eating junk food is part of the plan, to a point. But it’s nice that feeling gross kicked me into a week of feeling healthy. Since that fateful Friday, here’s what I’ve been doing:
…along with staying under 30 grams of carbs a day. That feels like plenty, right? I think I am nice and atoned now for my chocolate-covered-macadamia-nut sins.

So I just had one of the most debauched Carb Nites ever—it makes my stomach hurt just thinking about it, but I’ll tell you that it started with a mall Cinnabon and essentially went downhill from there.

I woke up this morning with a burning desire to spend this next week being extremely healthy and—key word coming up—disciplined. I’m starting with a pre-sunrise walk to yoga class, where I will mentally compile a list of every single thing I’ve come to believe is healthy for me. Later I will put them on a list, and after that I will do them.

And then when Carb Nite comes up again next, I’m thinking rice and potatoes and bananas sound lovely. Of course that’s slightly unrealistic because next Friday is Halloween, but the thought of fun-sized candy makes me want to hurl right now and that’s the truth.
Posted by Ironmom (Julie) No comments:

I’ve been working long days every day of the week just to stay afloat lately, but this afternoon I was feeling restless and in desperate need of a real break, though I couldn’t think of anything that really sounded like a good one. Then I saw the word “run” somewhere on the Internet, and I realized that was EXACTLY what I wanted to be doing.

I haven’t been running in—I don’t know, months? The Tabata sprinting thing was a nice, short workout, but I think they were just so hard that I just couldn’t make myself get out there and do it consistently. I wanted to approach this run in a sort of yoga-ish way, by which I mean push myself slightly, hold it there for a few seconds, and then back off and rest.

That is such a glorious way to do it. You go at the pace you like, let it get a little hard, and then walk until you feel like you’d rather be going fast again. If I would run like this on a regular basis, I’m sure it would eventually make me a better runner, too. But we’ll see how far I get with the “run only when the mood strikes” method.
Posted by Ironmom (Julie) No comments:

I put my arm around Mik in church today and was a bit taken aback—the kid feels SOLID, like he’s put on about 10 pounds of muscle. When we got home I had him weigh himself, and sure enough he’s put on 10 pounds of something in the past couple of months. It’s clearly not fat. Might be height. Or it might be him busting out of his shirts like the Hulk, just like I planned.

Hey, it might also be brain! He just got the news that he made the middle school’s Science Bowl team, which is a bigger deal than it sounds like, because this team regularly goes to nationals in Washington, D.C. I gave him so many high-fives as M.H. was reading us the email that my hand hurts.

I’m in a good mood today. On top of all of the above, the weather is nice, one of my bushes is blooming purple flowers, and my pastor just preached a sermon arguing that Genesis 1 is not science—which is at least an adjustment from his previous view, if not a 180. Sincere belief and intellectual honesty: You can’t ask for much more than that in a church.

I mean, now that I think about it for two seconds, yes, you can, but anyway here’s a pretty picture of my landscaping because I totally lied about the last pictures being the last ones: 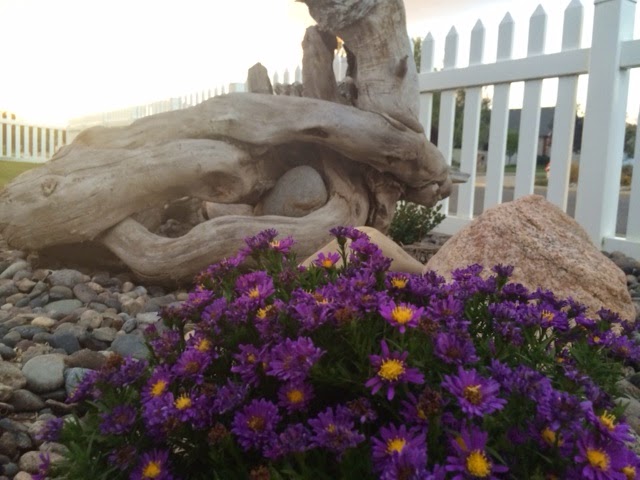 I have not really wanted to sound like a commercial for Carb Nite, but obviously I’m pretty sold on it, and I guess that’s just where “getting you back into my brain” has led me. I would have liked to tell you all about this as it was happening and let it all unfold more organically, but (a) I was more or less forbidden from doing that and (b) it did seem irresponsible to start flooding my blog with info about a magical-sounding diet until I had actually tried it myself and learned as much as I could.

Anyway, it’s been fun having a little story to tell you, and at least now my friends and family will know what I’m talking about—or more than usual.

And, obviously, it would make me pretty happy if anyone else tried this based on my suggestion and had M.H.-like success. (Or even Julie-like success, since I have had a ton of fun and am not actually sneezing at the 11 pounds I’ve lost so far.) I’m sure I’ll have more to say about it—though much less often—and will for sure let you know if I succeed in getting willowy.

So now you’re all caught up. The end!
Posted by Ironmom (Julie) 2 comments:

Regardless of whether this diet continues to work for me or not—and given my propensity to jump on new bandwagons embrace new adventures when they come along, my guess is I won’t be doing it forever—I have learned some useful things.

One, which I mentioned earlier, is the thing about our bodies being most efficient at turning carbohydrates into fat in the morning. Another is that the best way to eat those late-in-the day carbohydrates is after a weight-training workout, when all the carbs are going to go directly to rebuilding muscle. I started applying this latter point by heading to the gym and doing all my shoulder physical therapy right before Carb Nite. It immediately started feeling stronger, and I’d say I’m about 95 percent healed.

I keep thinking that if I were to ever do another Ironman—never gonna happen, but if I did—it would be solely to see if I could train successfully while applying all the new diet and exercise principles I’ve been learning.
Posted by Ironmom (Julie) No comments: