I suspected I was going to be swamped with work this month, and that’s what finally happened. I kept thinking, Maybe today is the day I’ll go back to running just to have something to blog about again. But the swamped-being ultimately won out, and the line graph I was making of how long I could run at a nine-minute-mile pace flatlined at around three and a half minutes. So sad for me! I might really need to give myself a do-over.

Since April is just about over and I didn’t want the GREAT resolutions to be a total flop, I did finally call and take care of the health insurance issue that was my errand. It would have been a lot smarter to do it at the beginning of the month, since it yet felt like a giant rock hanging over my head for 29 days and then it took about three minutes to make it go away forever. Live and learn.

So I didn’t achieve my goal, and the sunshine theme was kind of a bust (through no fault of my own), and I never did do the February errand that I keep advancing to each new month. Other than that, total success.
Posted by Ironmom (Julie) No comments:

My back still feels kind of off, but swimming last night didn’t hurt it even a little bit, so that was good. And I did butterfly again (YAY), although the slight pain that went with it seems to have migrated back into my right shoulder, which at least is where I would expect it to be. It may not be progress, but it’s novelty.

With any luck I’ll be able to run again tomorrow. I’m afraid that if I don’t get restarted, I can kiss the nine-minute-mile goal goodbye, at least for April. In May, I might need a do-over on both that goal and the whole sunshine theme.

I have been killing myself to finish a rush editing job by tomorrow, and this morning the client emailed to ask if, just maybe, not to rush me, but could she have it today instead? I told her it wasn’t going to happen, but then I killed myself a little harder anyway to see if I could at least get it to her early tomorrow. I edited for 13 hours straight, right up until the point that writing a dullish blog post sounded like a tropical vacation in comparison, so…aloha.
Posted by Ironmom (Julie) 1 comment:

I am trying with this “sunshine” theme, I really am. Yesterday afternoon it was very nearly hot out, so I sat outside in the sun to knit, until it got too windy. It looked like a thunderstorm was blowing in, and I got all excited that it was finally warm enough for that to happen. Then this morning I looked out the window and did a double-take: Turns out it was a snowstorm that was blowing in. Sure, Montana. Whatever you think is best.

I took my two days off from exercise and am much better except that I can still feel that twinge in my back. I’m hesitant to run intervals until it heals up, but I did an easy weight workout, am planning to swim tonight, and will hit the sauna.

I read something recently about sauna use being really good for you (can’t remember why off the top of my head) but I also have a theory that it should help with heat adaptation for the summer—if and when that ever occurs. I guess until these clouds clear off, a very hot room can be my poor substitute for sunshine.
Posted by Ironmom (Julie) No comments:

I think it was a mistake to try to get serious about running and weight lifting at the same time…while also continuing to swim, walk, cycle (a little), and do yoga. By some standards it was a really good exercise week last week, but I kind of hit a physical low yesterday, and then just now I kind of twinged my back while reaching into the fridge. It’s possible that my body is gently recommending that I take a day or two off. Which is exactly what I will do.

It was a good week on the knitting front, though. (I know that two months ago there was no “knitting front” to care about, but come on the journey with me.) True to form, I decided that the yoga mat strap I was starting was too wide, too boring, too time consuming of a stitch, and too ugly to really be worth it. So I ripped it all out and started trying to figure out what else I could do with double knitting. After a ton of trial and error, here’s what I came up with: 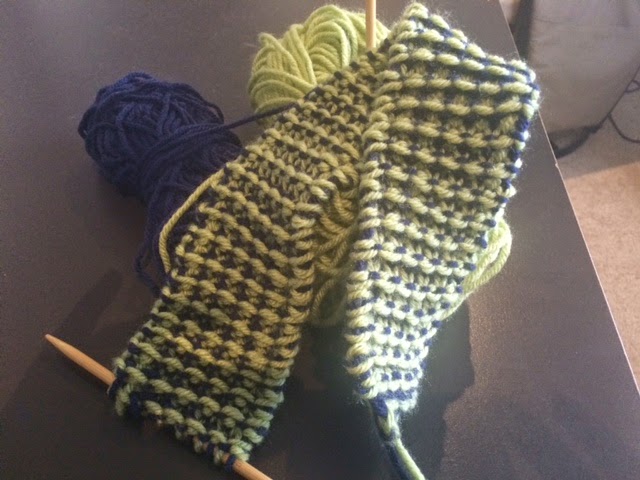 This pattern suits my little project perfectly: It knits up pretty fast, it’s thick and sturdy, it doesn’t curl, it’s the same on both sides, and I love how it looks when it’s stretched out, as it will be when in use: 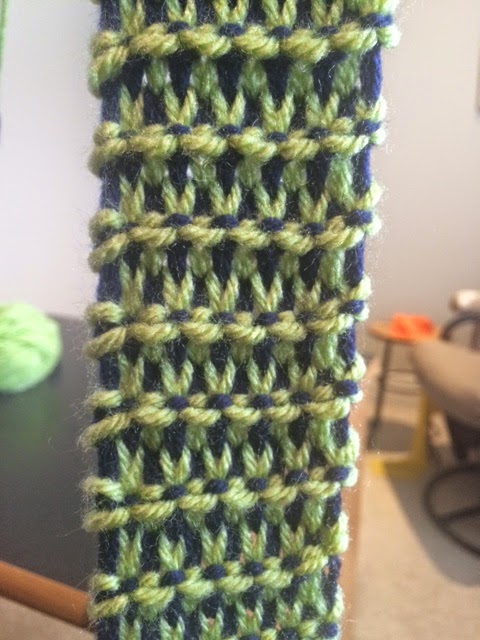 M.H. said I should start an Etsy empire of yoga mat straps, which would be a fine idea if I didn’t get bored so easily and liked working for 15 cents an hour.
Posted by Ironmom (Julie) 1 comment:

In the pool, on the needles

I swam last night with the group and was very excited to find that I can again do butterfly without significant pain. The annoying thing is that what pain there is has migrated to my left shoulder—which I never had the slightest problem with until I started doing rehab for my right one.

I figured it was a good idea to do the same exercises on both sides so I wouldn’t end up with any imbalances, but I guess…not? Anyway, the plan remains the same: Stop the rehab, stop focusing on upper-body weight lifting, keep stretching, and see if it will just freaking heal now.

P.S. Here’s what I finally started: 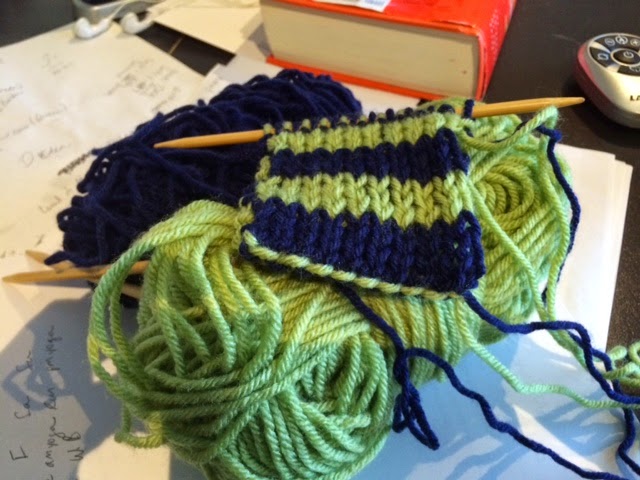 It’s not exciting except that I had to learn a new technique (double knitting) to do it. The plan is to knit a long strap, attach metal rings to both ends, and use it to carry my yoga mats around. I’ve already made myself a yoga mat strap, but this one will be better and prettier and will live on the second set of mats I own. Kind of a boring project but useful, educational, theoretically quick, and making good use of scrap yarn. I talked myself out of doing something wacky for now.

P.P.S. Maybe I should put my abundance of free time to use and clean off my desk, huh?
Posted by Ironmom (Julie) No comments:

The joy of creation

They aren’t much, and off the top of my head I can’t even remember what they are called, but LOOK! Some cute little flowers sproinged out of my landscaping project! 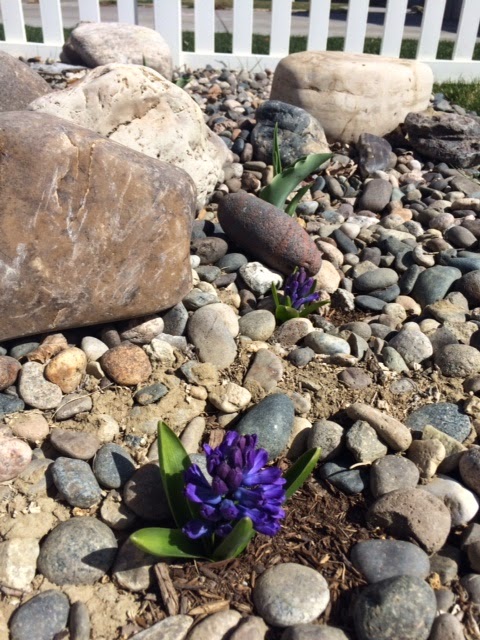 Something got me started Googling knitting techniques yesterday, and now my head is buzzing with ideas about what I want to make next. The hard part for me is settling down and actually doing one of them.

Here’s how it usually goes: I come up with a reasonable, easy project that uses yarn I already own (which is quite a bit) and is within my capabilities. So far so good. But immediately after deciding on something, I start thinking of ways I could improve it. The Internet is a gold mine of knitting ideas, so I find something that’s a little bit cooler, and something that’s a little bit cooler than that, and the next thing I know I’m contemplating creating some impossible work of art or magic that is way beyond my knitting skills, requires me to buy even more yarn, and possibly has never been attempted before.

I tell myself that the problem is if I’m going to spend a million hours on a project, I really want to love it for the whole million hours. But my real problem is that deciding what to knit is a lot more fun for me than actually knitting it. Which is how I ended up with so much yarn.

I was the same way (to bring this back around to gardening) with bulb buying last fall. Do you know how many different sizes, shapes, and colors of iris there are? But at least then the changing of the seasons imposed a firm deadline on my shenanigans.
Posted by Ironmom (Julie) No comments:

I decided on a really simple strategy for working up to a nine-minute mile. Anytime I’m at the gym, I hop on a treadmill, warm up a bit, set it for 6.7 mph, and then run as long as I can. (When I say “can,” you should actually think something more along the lines of “want to.” Not trying to kill myself over this.) After that, I walk to recover for a while, and then I run a couple of faster, shorter intervals—something like 30 seconds at a seven-minute-mile pace with lots of recovery.

The only part I’m recording is how long I can run at 6.7 mph, but I figure the intervals that follow are the best way to get myself into shape and to make my goal pace feel pretty easy. I think they must be working, because they are a killer, especially when you consider that the whole workout is over in 10 to 15 minutes.

I’m very jealous of an online friend who has been blogging about her powerlifting adventures, so I’m taking that as a sign that I need to a) find some sort of plan I can really get behind, b) follow through, and c) track everything so I can see my own progress. Of course, I already have a gym-related goal for April that I’m tracking, so I need to keep that in mind, too, and not go overboard with an extra new thing.

On the other hand, I’m back in limbo as far as work—it seems that both major projects I was planning on are now up in the air—so I might as well go live at the gym until that all gets sorted out.
Posted by Ironmom (Julie) 2 comments:

I’m trying to develop a simple strategy for being able to run a nine-minute mile by May, and I’m tempted to just go to the gym every day, set a treadmill for 6.7 mph, and try to gradually build up the length of time I can run at that speed. That’s basically the strategy I used to get up to ten push-ups in February. I’m thinking that if I can go from one push-up to ten in four weeks, then I can probably go from one minute of fast running to nine in the same amount of time.

I’m not sure that plan passes the “Is that what a running coach would tell you to do?” test. Probably not. I’m sure a coach would have me doing a mix of endurance runs, hills, intervals, strength training, rest days, and who knows what else.

The plus side of my method, though, is that I would be able to track my progress in a nice straight line, which is appealing—and maybe even keep extending that line for a few more months until I can do a 27-and-a-bit-minute 5K.

The downside is that I couldn’t do it outside, which…hmmmm. I do like the idea of getting some sunshine.
Posted by Ironmom (Julie) 1 comment: