I thought seriously about abandoning the whole monthly resolutions concept for August. I let most of July’s plans slide and, for reasons I will explain in a moment, I really don’t see August being any more conducive to pursuing the quest for self-improvement.

But then I remembered that I get to make the resolutions, and I can make them as easy as I want. So:
Basically I see August being broken into two stages: the Maui stage and the whatever’s-the-opposite-of-Maui stage. Because the moment we get home from our trip, I begin a mad rush to get Happy’s new 1,000-page book edited, laid out, proofed, indexed, and everything elsed. By August 31. Along with who knows what other work will materialize.

In other words, I’ll be chained to my desk but hoping that the combined influence of my goal, affirmation, and theme will be enough to get me out of the house at least a couple of times before the lovely Montana summer goes away.
Posted by Ironmom (Julie) 1 comment:

The spiral of good intentions

So now of course I have this plan to start a new diet as soon as we get back from Hawaii. I’m planning to follow it to the letter, which will be…not difficult, really, but it will require some thinking and planning and cooking and strategic shopping. Well, fine. I can do that.

The problem, though, is my brain gets hold of the New! Life! Plan! and cannot stop. Before I realized what was happening, I had mentally made plans to also:
I only wish I was kidding. I caught myself before any of this got written down or (God forbid) entered into an Excel spreadsheet.

Are other people like this? And are their life ambitions as shallow and stupid as mine?
Posted by Ironmom (Julie) 6 comments:

I have a New Life Plan, and you are welcome to tell me it’s stupid. It won’t change my mind, because I already know it’s stupid.

Several weeks ago I volunteered to do some free editing for a writer/blogger whose work and ethics I really respect. He has developed a diet regimen that’s getting some amazing results in his experimental group and was writing a short ebook about it. I wanted to be the editor a) because it’s for a good cause, b) because I was going to read it anyway, and c) because I wanted to be the first one to get to hear what the miracle diet was. Oh, also, d) this is someone I’d like to work for in the future (for pay), and I figured one good way to get in the door was to just invite myself and walk right in.

Anyway, I had told M.H. that I was going to do exactly what the book said, no matter what it was, and now that I’ve read it, I intend to do just that. But I don’t want to start until we get back from Maui. In the meantime, I need to get all the Carb Nite junk food out of the house, and I’m doing that by eating it, in the evenings. (At least that much of the Carb Nite ethic has stuck with me—I absolutely refuse to eat carbs before 2 p.m.)

I know it makes no sense at all to start a diet by sabotaging my diet, but here are the advantages: a) the junk food will be gone, b) the before and after pictures will show a more impressive difference, and c) I won’t be working against my all-or-nothing personality by starting a new thing and then having to decide whether to continue it while on vacation or cheat on it immediately. Oh, also, d) I want to.
Posted by Ironmom (Julie) 3 comments:

Triathlon blog: The next generation

Time for Mik’s annual triathlon race report, the one time a year this blog returns to its origins, if only in the most tangential way imaginable!

Actually, after you hear the tale, you may be inclined to be disappointed in me for falling down on my job as a supposedly experienced triathlon mentor, but please remember that I was never much of a bike person. (Foreshadowing!)

Anyway. Mik was in great shape for this race, despite the fact that he never trained for it, at least specifically. No biking, no running, no open water swimming—but he was swimming in a pool an average of three or four hours a day and doing three hours a week of dryland training. I figured that was plenty, especially since he had finished last year’s race without any tri-specific training.

The swim went really well, obviously. He was one of the first out of the water, had a good transition, and took off on his bike. But when he was about 10 feet out of the transition area, he tried to shift gears and the chain fell off. M.H. went running over and got it fixed for him, and we were all cursing his terrible luck to lose all those precious seconds.

It turns out that the chain had fallen off again almost immediately, and although he was able to get it back on himself, he was afraid to change gears again after that. So not only was he riding on a mountain bike rather than a racing bike, but it was a FIXED-GEAR mountain bike. He made it through the race in a middle gear, but I’m sure getting up the gigantic hill on the course was a total nightmare.

Finally he arrived in T2, and 29 minutes later, he was done. See? 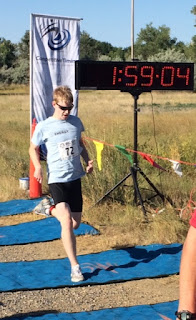 His time was actually a few seconds faster than the previous year, and he won his age group of one, but his legs were shaking like crazy. I felt bad—not because I could have done anything at all with the bike personally, but just because it would have been smart to have him ride it long enough to discover any mechanical issues beforehand.

A lesson for next year, I guess.
Posted by Ironmom (Julie) No comments:

The rate of incoming tea is about a thousand times greater than the rate of outgoing tea, but we do have a short growing season. So if I drink nothing but mint tea for the rest of my life, and convince all my friends and family to do the same, I should be good.

Here’s a measure of my mint-related desperation: I needed some insect repellent for an outdoor event, so I used Google to find out whether mint repels insects. Turns out that it does, but I was leaving in 20 minutes. So I microwaved a whole stalk of mint in some water until it boiled, let it cool, and then basically took a sponge bath in it. (There’s a real recipe for mint-based insect repellent here.)

I don’t know if it really worked, but it didn’t not work. I saw mosquitoes but got no bites!

So…here are the rules I’m following for meditation—one of my July resolutions:


Step 4 is the important one: They say each time you bring your focus back to your breath, that’s like “a biceps curl for your brain.”

A nice image, but what my brain was getting the first week was more like Zumba. I couldn’t go five seconds focusing on my breath. (I knew that I spent a lot of time in my own thoughts, but I hadn’t realized there was a fireworks show going on in there.) And then add to that the struggle over what counts as a “thought.” Obviously I’m allowed to hear a lawnmower in the distance, but if I attach the word “lawnmower” to it in my mind, is that a thought? How about feeling an emotion—say, triumph at focusing on my breathing for two whole breaths—is that a thought? How about thinking about whether the thought I just had counts as a thought? How about mentally blogging the experience while I’m having it? If we had another dog, what would we name it?

Another issue for me is that focusing on my breath makes it difficult to breathe—I can’t figure out what my normal rhythm is supposed to be and end up taking these unnatural, stuttering breaths. They say that’s normal and fine, that it’s a mind exercise, not a breathing exercise. But it’s tempting to stray away from the boring focus on breathing that makes me physically uncomfortable and just enjoy the fireworks.
Posted by Ironmom (Julie) No comments:

I had already thought long and hard about my “Think like a homemaker” theme for July when I started coming across lots of references to this book about “tidying up”. There was this post, for example, and this one. The “tidying up” concept obviously has some appeal to me, and I put a hold on the book at my library. But I’m not sure I’m ready to go all in with this particular method.

Apparently, the process is to look at all your possessions in turn and then keep only the ones that “spark joy.” Here’s the result the guy from the second post had:


The moment I finished my tidying extravaganza, my room looked amazing. A couple friends had also read the book, and we proudly swapped photos of our immaculate closets. The only inconvenience: I no longer owned pants, and that made for an interesting week.

I guess I see the appeal of owning only joy-sparking clothing, but what a huge, stupid waste to get rid of all your functional pants. Listen, buddy, your closet may be pretty, but your fellow planet-dwellers are not exactly lining up to admire it.

Or maybe I’m being too judgmental. After all, this is about what sparks joy for each individual, personally. Maybe I am just unusually enthusiastic about my earth-friendly, pants-owning ways.
Posted by Ironmom (Julie) 1 comment:

Just literally turned the page on a new month, and you know what that means! Time to stop feeling guilty about not writing down 10 ideas every day announce my new month’s resolutions!

Yeah, June’s rule fizzled out badly—I guess in my heart I do not prioritize being “an ideas machine.” But the couple of ideas I did get out of it made me happy, so that’s something. I had also set a goal of selling $100 worth of stuff, but I sold only $70 worth. (That’s partly due to laziness and partly due to no one wanting to buy my stuff.)

It is a little sad when you—when I—when one can’t keep a resolution going for four measly weeks. Frankly, I think five separate things a month is turning out to be a lot to care about all at once, plus I’m juggling all the bonus rules I made myself regarding my shoulder. Maybe this will get easier with practice. Maybe it will get harder with apathy. Who knows!