After reading about them somewhere, I bought a jicama. It looked like this: 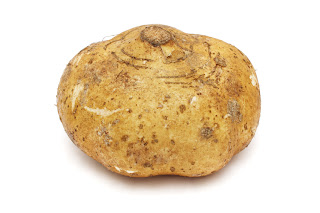 It sat on my counter for six days. This morning, my husband referred to it as the "jicama of shame."

So this afternoon, even though I would have rather had chocolate-covered macadamias for lunch, I cut it open, peeled it (with some difficulty), and tried it. I had heard the taste described as "a cross between an apple and a potato," and that was pretty accurate. It also reminded me of a water chestnut.

The thing seemed too sweet to be treated like a potato, but I've been having good luck with hashes. I first fried some bacon in order to cook it in the grease. (I wanted this jicama to get the message loud and clear that it should be savory, not sweet.) When the bacon was done, I took it out and added to the pan about a quarter of a chopped onion, a clove of minced garlic, and half the jicama (grated), plus salt and pepper. When I had deemed that all more or less cooked, I cracked in an egg and stirred it around to coat everything and let that cook. Then I crumbled the bacon over it.

It was fairly yummy. I think I like it better than sweet potatoes, anyway. The true test will be what happens to the other half-jicama sitting in the fridge.
Posted by Ironmom (Julie)