Flawed eCard of the Day: There's no secret diet? 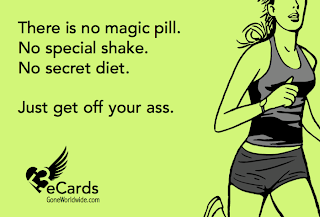 This friend is a great person, and I'm sure she posted it because it motivates her, but unfortunately it's wrong. And of course it's not my job to tell my Facebook friends when they're wrong, but here on my own blog…it's even better than a job. Telling people when they're wrong is a pleasing recreational activity.

Of course the part I take exception to is that there's "no secret diet." There's something about that that sounds so wholesome and true, but it's actually playing right into the hands of the junk food manufacturers. They need you to believe that you can eat their products and still live a healthy life…that if you're fat, it's because your faulty willpower made you eat too much, not because you were eating their deadly and addictive "food" in the first place.

Have you heard about Coca-Cola's new anti-obesity campaign? It's a concerted effort to perpetuate the calories-in-calories-out myth, which is easy because it sounds like such common sense. But the fact is, drinking sugary, or fake-sugary, beverages spikes your insulin levels, messes up your hormones, and tells your body to store fat. If you want to do that to yourself as a "treat," that's your own business, but there is absolutely no basis for believing that Coke products are part of this nutritious breakfast. (Yes, including their diet drinks. Yes, including their sports drinks.)

So just to clarify: Getting off your ass is good. (Running for miles on end is less so, but I'll save that for another eCard debunking.) But there is a secret diet: Don't eat sugar or artificial sweeteners. Don't eat grains. Don't eat soy, legumes, or vegetable oils. Wish it wasn't such a secret.
Posted by Ironmom (Julie)